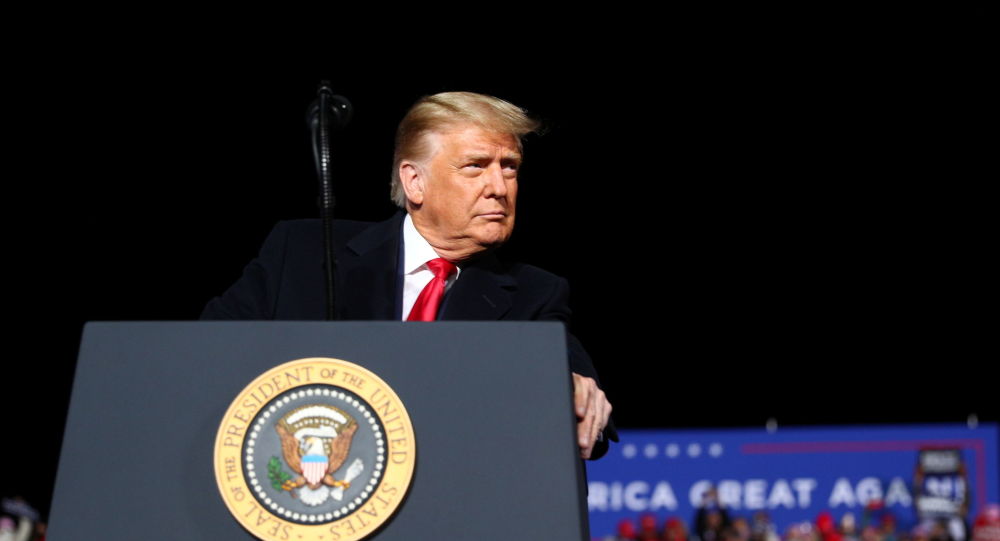 Republicans currently hold a 53-47 majority in the Senate, which is why Democrats will have to obtain at least three seats to claim an upper chamber majority if Democratic nominee Joe Biden prevails in the 3 November election.

The Washington Post has quoted an unnamed source as saying that US President Donald Trump told donors at a recent fundraiser in Nashville that he believes that keeping their majority in the Senate will be a tricky task for Republicans.

“I think the Senate is tough actually. The Senate is very tough. There are a couple senators I can’t really get involved in. I just can’t do it. You lose your soul if you do. I can’t help some of them. I don’t want to help some of them”, Trump reportedly said at the Nashville Marriott event. The White House has not commented on the report.

The fundraiser came hours before the second and final presidential debate between Trump and Democratic nominee Joe Biden, which was also held in Nashville.

During the debate, the US president said he thinks Republicans will instead take back control of the House, where Democrats currently hold a majority.

“I think we’re going to win the House”, POTUS claimed, adding that he thinks so because of House Speaker Nancy Pelosi’s behaviour and blaming her for delays on a new coronavirus stimulus bill.

“That’s one of the reasons I think we’re going to take over the House because of her”, he pointed out.

National Republican Senatorial Committee (NRSC) spokesman Jesse Hunt has, meanwhile, cast doubt on Trump’s remarks that he does not support some Senate Republicans.

“The Republican-led Senate and President Trump have had a great partnership over the last four years, highlighted by the fact the chamber is poised to confirm a third Trump Supreme Count [Court] nominee in the coming days”, Hunt told The Washington Post on Saturday.

He was apparently referring to Senate Majority Leader Mitch McConnell’s push to hold a vote on Amy Coney Barrett’s confirmation on Monday.

“Nancy Pelosi has turned the House into a liberal nightmare and if Chuck Schumer gets control of the Senate, he’ll do the same thing”, Hunt added, in a nod to the upper chamber’s Democratic minority leader.

Hunt spoke as Mandi Merritt, National Press Secretary for the Republican National Committee (RNC), was cited by The Hill as saying that “the enthusiasm for President Trump and Republicans up and down the ballot remains sky high”.

“The RNC has built the biggest and most sophisticated Get Out the Vote programme in history, and we are confident that voters will turn out to elect Republicans as they understand what is at stake this election – freedom and prosperity under President Trump and Republicans, or a ‘dark winter’ ahead under Joe Biden and Democrats”, Merritt emphasised.

The remarks came a week after Trump hit out at Republican Senator Ben Sasse, who earlier slammed POTUS as a “TV-obsessed narcissist” who “spends like a drunken sailor”.

The senator believed Trump was “likely” to lose to Biden on 3 November and could take Republican senators down with him, saying: “I think we are staring down the barrel of a blue tsunami and we’ve got to hold the Senate and that’s what I’m focused on”.

…Nomination to run for a second term. Then he went back to his rather stupid and obnoxious ways. Must feel he can’t lose to a Dem. Little Ben is a liability to the Republican Party, and an embarrassment to the Great State of Nebraska. Other than that, he’s just a wonderful guy!

The president branded the Nebraska Senator “little Ben” in a series of tweets, in which he compared Sasse to other disloyal Republicans, including former Arizona Senate Republican Jeff “the Flake” Flake.

Trump also described Sasse as a “RINO” – Republican in Name Only – and suggested that he should be ready to quit or else should be replaced by the party in his state.

The Israeli government is urging its citizens to avoid travel to the Gulf states of the United Arab Emirates...

US19:19 GMT 03.12.2020Get short URLTrump has long threatened to take action against big tech, accusing the business sector of...

What channel is the World Series on tonight? Time, TV schedule to watch Dodgers vs. Rays Game 5

Michigan hotel creates ‘Buddy the Elf’ room ahead of Christmas